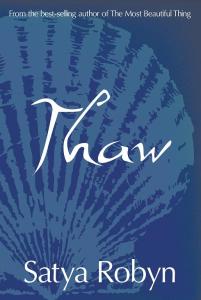 Ruth is facing the biggest decision of her life – whether to end it.

Thirty two-year-old scientist Ruth White is looking for a reason to carry on living. Lonely and stricken by grief, she gives herself three months to decide whether to go on beyond her thirty-third birthday and begins to record her thoughts in her daily diary.

When Ruth meets the eccentric Red, an artist who Ruth commissions to paint her portrait, she feels the faint stirrings of something that has been missing from her life for so long: love.

But can Red thaw Ruth’s frozen heart – and does he want to? While Ruth tries to rebuild relationships with friends and family, the clock is ticking. Can Red save Ruth from herself and make her believe life is worth living – before it’s too late…

Thaw is an intense and thought-provoking read that will appeal to anyone who has ever been touched by the healing power of love. Once again, the bestselling author of The Most Beautiful Thing applies her insight and shows us how, even when there appears to be none, there is always hope.

“The subject matter may sound dark, but this is in no way a depressing novel. Ruth’s journey into understanding herself and her life is really moving and very original. I love the diary structure – it gives the narrative such a strong momentum that you can’t put it down as you wonder what decision Ruth will come to. I admire the writing for the risk it takes in looking at this issue straight on, without any histrionics or self pity. Ruth is a great character, brave and uncompromising in the way she goes about looking at her life – it’s a privilege to spend time with her.” ~ Esther Morgan

“A vivid and delicious lyricism runs throughout Satya Robyn’s compassionate and compelling novel. `Thaw’ tells the story of thirty-two year old Ruth, who `doesn’t know if she wants to be thirty-three’. Her life is meticulously ordered, her relationships painstakingly detached – her loneliness devastating. `Thaw’ is Ruth’s journal, covering three months, as she decides whether or not she will take her own life. Describing deep-seated loss and self-destruction, this novel is a necessarily darker, spikier read than Robyn’s assured and sensitive debut, `The Letters’ and yet the pacing of its diary structure makes it difficult to put down. Most of all, there is an authenticity about Ruth and her struggles that cries out for understanding, reaching far beyond the novel’s pages.
It is this sense of empathy, combined with the beauty of Robyn’s prose, which makes `Thaw’ such a valuable and unforgettable book.” ~ Megan Taylor

“Satya Robyn has a fan in me, for life.” ~ Christine Bode