This painting is part of a virtual gallery to celebrate the launch of my new novel, Afterwards. 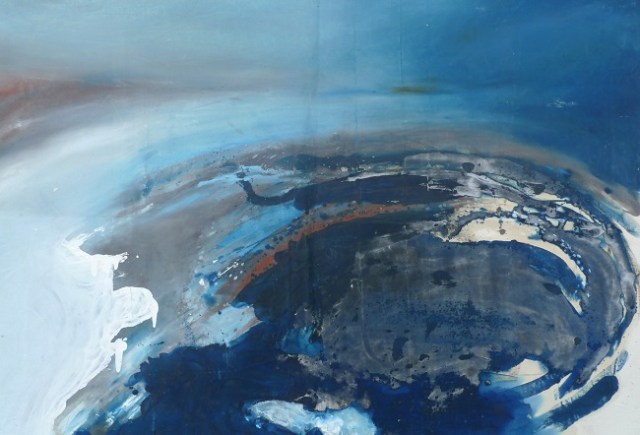 Mark Charlton is a life writer and painter based in Wales. His first book, Counting Steps – a journey through landscape and fatherhood, was published by Cinnamon Press in 2013 and his blog www.viewsfromthebikeshed.blogspot.com has revived widespread acclaim. He also plays the banjo and saxophone and is forever grateful to his  tolerant neighbours!

A bonus: a piece of writing by Mark, called Afterwards.

By eleven on Christmas morning we were on the beach. The sky was cloudless, the sea a milky jade; frost on the pebbles. We walked to clear our heads from the night before.

Our neighbours had invited us round. Lovely people, honest friends; they drink too much, and so did we. In truth, neither of us had been that bad, but when Dylan woke at eight and said ‘Can I sleep a bit more,’ I’d thought, perfect child.

Then breakfast and presents; the mess of paper on the floor and me shoving it into plastic bags. The boys were on form too: grateful, attentive to their brother, nice presents for their mum – a typical family Christmas.

Then I remembered the night before.

Another neighbour had been there; farm labourer, a touch boisterous but no edge to him. Two years ago his wife hitched up with another bloke, leaving him with her debts as well as two pre-school sons – for good measure she also left her teenager daughter from a previous relationship.

An ordinary kid, the teenager was thrust into the role of surrogate mother to her little half brothers. And judging by what we saw on Christmas Eve, she does it naturally enough: calming, cuddling, explaining… ‘Father Christmas will come tomorrow,’ she said. ‘After me and your Dad come back from the milking.’ She scooped them up for bed.

‘You’re not really going milking tomorrow?’ I asked, when she returned.

And she looked at us with clear eyes and a soft smile. ‘It’s not that bad. We’ll be finished by five thirty and the boys will sleep through.’ She went on to explain that she does this every weekend and holidays, though not currently on school days as her exams are coming up. ‘It’ll be harder in the sixth form, but I don’t want to milk cows all my life.’

No more was said; I was lost for words.

As Jane and I walked the beach we talked about how different lives can be; how lucky our kids are, ourselves too. It was her calm acceptance that had struck us most, her willingness to do what was right; the responsibilities ahead of her years.

‘My Mum’s coming round tomorrow,’ she had said. ‘It’s good the boys see her, but I won’t stay while she’s in the house.’

There’s an island twenty miles off shore. It appeared like a dark circle, weirdly undercut – as if a ball had been stuck to the horizon. I realised the surface was miraging; the island reflecting its own shape in the water. A kestrel hovered above us, searching the tide-washed sand, oblivious to our presence.

I wanted to stay but we had to hurry: visitors coming, the turkey in the oven, the table to prepare.

As we turned to leave a tanker was rounding the headland, its stern fading in the mist. 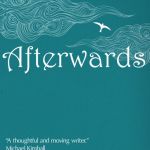 “I found the book most heart-warming and uplifting and carry the story with me long after I put the book down.” ~ H Hall

Afterwards is the new novel from Satya Robyn. After a serious car crash shatters April’s mundane life, she decides to run the London marathon. Will she reach the finishing line? Compelling and illuminating, it reminds us that it is never too late to begin over again.